Gauging the Depth of a Commuter Market 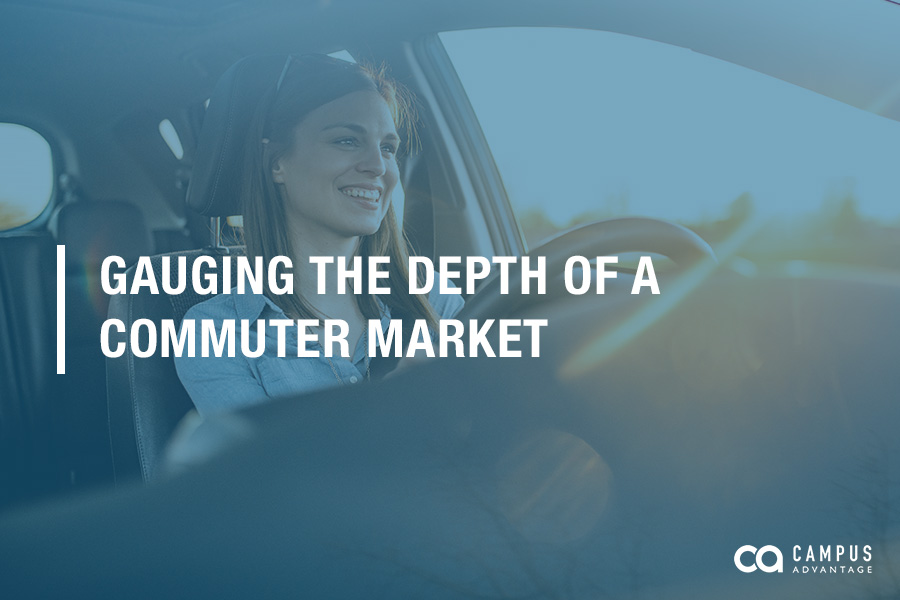 Does a university with a reputation as a commuter school still have an unmet demand for off-campus housing? Typically, commuter students are not likely to be consumers of off-campus housing due to  higher living expenses and cost savings of living at home with their parents. However, there may still be students who value the full college experience, including living in a purpose-built student housing community with their peers. A university with a significant amount of commuter students can still create enough demand to justify additional housing due to the lack of overall supply within the market. So, how can the depth of a commuter market be gauged? At Campus Advantage, we evaluate the following key components when determining if a development can be successful within a commuter market:

When determining demand for off-campus housing, full-time enrollment should always be analyzed. Full-time students are more likely to be consumers of off-campus housing, as they are typically traditional students who spend most of their time on-campus and participating in university-related events. Non-traditional students are likely only taking one to two classes while also working a full-time job and are less likely to spend as much time at school. Commuter students can be either traditional or non-traditional students; however, a lower percentage of full-time students is often an indicator that many students likely commute or are living in conventional, multifamily housing closer to their jobs. If there is a shift in enrollment and full-time enrollment begins to trend upwards, this could be an indicator that the university’s student demographic is evolving and the university is working to reposition themselves as a traditional campus. Analyzing the trends of full-time enrollment, as well as strategies in place to grow enrollment, is imperative when gauging the depth of a market.

Determining how many students are commuting from home can be challenging if the university does not track this information or is not willing to provide it. However, there are several metrics that can assist in determining the true commuter student population. One method is to determine how many students are from surrounding counties. As a conservative measure, it can be assumed that students with a permanent address within a direct surrounding county are likely commuting the short distance from their parent’s house to campus. Another method to determine their residence is by surveying students directly. When conducting a student housing market study, Campus Advantage speaks to more than 100 students throughout the market to gauge their interest in a new development. These intercept surveys help uncover if students are commuting and if they would consider living in purpose-built housing close to campus if it were available.

The average age of the students attending the university should also be considered when determining if a commuter school has an unmet demand for off-campus housing. Typically, an older student demographic is less likely to be consumers of off-campus, purpose-built housing due to their marital, familial, or employment status. Students with families or who are also working full-time while attending classes tend to gravitate to multifamily housing where they can lease by the unit instead of by the bed, or they can lease smaller unfurnished units. Older, part-time students are considered non-traditional students, and these demographics should be considered in conjunction with the commuter student population.

Universities that previously had, or currently hold, reputations as commuter schools can still have the capacity for additional off-campus, purpose-built housing. To begin gauging the depth of a commuter market, evaluate full-time enrollment, students’ counties of origin, on-campus capacity, and student demographics.

Using a third party housing consultant that takes this analytical approach will help ascertain an unbiased conclusion which will determine if additional student housing is feasible. Our student housing Market Analysis and Feasibility Study provides a full examination of a university’s enrollment trends, student demographics, on-campus housing supply, and enrollment projections to determine the feasibility of a new development project. The analysis also evaluates the supply and demand of a market, taking into consideration the commuter student population. Additionally, a comprehensive study of the off-campus competitors is completed, including an analysis of the rental rates, concessions, and rent growth projections.

Based on the market dynamics, Campus Advantage’s student housing consultants will provide recommendations on unit types, amenities, and features that will attract the identified targeted demographic, especially if the market is mostly comprised of commuter students. Gauging the depth of a commuter market is one of many steps within a Market Analysis and Feasibility Study which, in totality, provides a developer the necessary insight into a market’s true demand. If you are interested in a Market Analysis and Feasibility Study for your property, contact us here to learn more about our student housing consulting services.