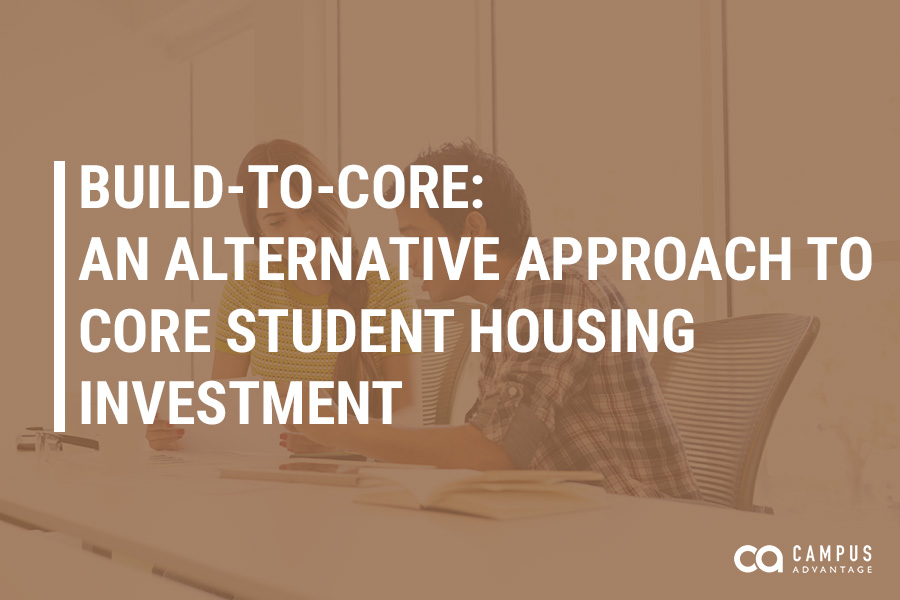 Student housing is a hot area for real estate investment right now. In 2016, the industry saw its most impressive sales in U.S. history, with approximately $10.35 billion in total sales volume. While sales slowed from this all-time high in 2017, the outlook for student housing remains positive, offering steady, long-term returns that are attractive for diversifying institutional investors real estate portfolios.

Due to the institutional demand for core, pedestrian-to-campus student housing, along with the limited supply, cap rates are at an all-time low averaging at or below 4.5%.  If you’re considering investing in student housing for the first time, or if you have historically focused on acquiring existing real estate in managing your investment portfolio, the idea of building a new property as part of your core investment strategy might be outside of your comfort zone. It’s understandable that institutional investors, for example, don’t normally find themselves in the business of real estate development. However, by acquiring student housing rather than building, you are diminishing your potential yield, as well as introducing risk to your long-term returns. For these reasons, build-to-core programs, in which an investor provides capital to a seasoned developer, should be considered as part of your investment strategy.

The number one reason investors should consider a build-to-core program is that the yield differential (cost) associated with building versus acquiring core assets is significant. A new build typically costs 20-25% less than the cost to purchase an existing student housing development. The capitalization rate is 4.5% when you acquire, while you could build for a 6.5% cap. In short, your returns are likely to be better if you build-to-core. A build-to-core strategy also allows public real estate investment trusts to “build in” future years of rent growth into their base rent. Conversely, when buying a newly constructed asset from a merchant builder, it is likely that the developer has pushed rents as far as possible during the initial lease-up of the asset, limiting future rent growth, thus resulting in a lower overall yield.

Build-To-Core for a Sound Investment

Build-to-core programs offer a safer long-term investment opportunity when compared to acquiring a new student housing asset “off the shelf” from a merchant builder, who has little on the line with regards to the success of a property over time. Student housing is unique in real estate because of its rigid leasing cycle, which presents only a small opening window that must be met in August of each year. With the incredible cost involved in a failure to meet the student leasing window and move-in deadlines, the urge to prioritize schedule in the build process is understandable. Yet doing so can have long term consequences that can greatly diminish the value of your investment and the property’s potential to drive steady long-term returns. To meet schedules, merchant builders are more apt to cut corners in the build that are not obvious during inspection — thus, don’t risk the sale but risk the quality and soundness of the property. Typical issues experienced due to rushed build cycles include:

Due to the increased likelihood of merchant builders prioritizing schedules and cost over other factors, acquiring from merchant developers is often a risky proposition. Unhappy students aren’t shy about making their dissatisfaction known, and association with a poor property investment can cause steep financial headaches due to required remediations and reputation management, years down the road.

Many investors are adding student housing to their portfolios as part of their core investment strategy. While these investments are considered relatively safe and stable, there is typically more to be gained by engaging in a build-to-core program. While the build-to-core approach may appear outside-the-box, it’s the best way to maximize risk-adjusted student housing returns. The NOI yield for the acquisition of a newly constructed, pedestrian-to-campus student housing asset is currently about 4.5%, versus 6.5% when developing a similar asset with a long-term partner. In a build-to-core program, the developer has a shared interest in the long-term success of the property and is likely to make decisions in the development and build phases of the project that produce operational efficiencies and long-term payback.